Here’s part two of “What’s That @#$% Noise”. This was meant to be a one episode thing, but my list kept growing. I’d like to thank my friends who kept reminding me of various vicious noises we’ve worked on through the years.

Continuing in no particular order:

A lot of noises sound like they are coming from the bottom bracket. Many times the source is somewhere else, but sometimes it is the bearings. Last week Virgil brought over his bike with a creaking whenever he pushed down hard on the left pedal. We pried the outer seal off the left bearing (Shimano) and it was all rusty brown inside. But it was ten years old! I’d call that a good run.

Modern sealed bottom bracket bearings are amazingly durable. I have found Shimano external threaded bearings especially long-wearing, as were their prior generation of cartridge bottom brackets. Recently Shimano reduced the size of their bearings, presumably to shave weight. We’ll see if they are still as durable. Early failure on some of the other brands of external bearings is not uncommon in my experience.

Often a failed bearing can be felt as a looseness while pushing a crankarm side to side. Roughness or looseness can also be felt by removing the crank and turning the bearings by hand.

I’ll say it right up front. I am no fan of press-fit bearings. There are so many issues that don’t exist with a threaded interface. There are two advantages to press-fit in its various forms: 1. It allows the use of a larger OD crank spindle, and 2. It allows frame designers to stiffen the bottom bracket area by making it wider. These are real advantages. But they are offset by one serious disadvantage. An effective (noiseless) press-fit must be machined to a very high level of precision. Machine a precision bore into carbon fiber or aluminum, then press a hardened steel bearing into it, ride a couple thousand miles, bang the bearing out and replace it. Repeat this a few times and your precision interface is not so precise, if it ever was.

For Trek bikes, there is even a 0.1mm oversize bearing set to accommodate frames that were initially too loose or become so. 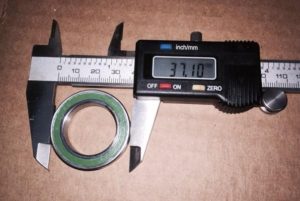 Creaking press-fit bottom brackets are so ubiquitous that there is a market for kits to convert to a threaded torque-able interface.

Threaded bottom brackets can creak too, if the threads are dry or insufficiently torqued. But I know how to fix that.

Truth in blogging admission: Even in threaded bottom bracket designs, the bearings are press-fit into the threaded cups. But, it’s a lot easier to manufacture a precision small part, like a cup. And the bearing only has to be pressed in once.

Here is a good video from Art’s Cyclery on front derailleur adjustment.

On some very “compliant” frames, the chain will rub the derailleur cage when you stand and pedal hard, just because the frame is flexing out of alignment.

Sometimes while on the small chainring, you think your chain is rubbing on the derailleur cage, but it is actually contacting the large chain ring. This will happen when you are on the smallest one or two rear cogs. It is more likely to occur on a bike with extra short chainstays, a big difference between small and large chainring diameters, and/or non-round chainrings like Rotor Q-Rings. A close visual inspection will verify this condition. There’s not much to do about this but avoid the small chainring / small cog combination.

Clicking or squeaking from a chain fault will usually repeat about every 2-3 crank revolutions, not in time with wheel rotation nor in time with pedal strokes. It repeats every time the bad spot on the chain passes through the rear derailleur or over the rear cog. Visual inspection while cranking the bike by hand will usually reveal the problem. Sometimes it is easier to spot the problem while back-pedaling.

Fix this fast. Your chain could be about to come apart.

I have a set of Zipp wheels that made an annoying ticking noise at low speed. I found that one of the spokes was turned so that it was not flat where it crossed its counterpart. Every time I torqued the wheel from a stop, the spokes would rub past one another. This is normal. But the spoke that was not laying flat would catch then release, making a ticking sound each time it did. Turning the spoke so it lay flat solved the problem instantly.

Valve stems can rattle inside tall profile rims, producing the most annoying rattle, made worse by the acoustic properties of carbon wheels. There are a couple of quick fixes for this condition. The cleanest fix is to punch a strip of electrical tape over the valve stem and onto the rim. Just make sure the tape does not interfere with the brake track. Pro tip: Use a contrasting color tape to make your valve stem easier to find. 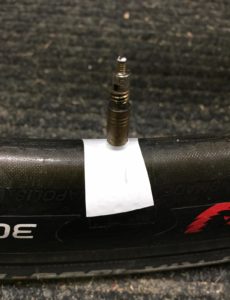 If you’re out on the road and all you have is a rubber band, here’s a quick, if not attractive method of solving valve stem rattle. 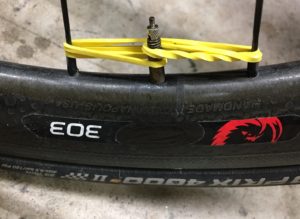 Many of Mavic’s wheels use a freehub with a Delrin bushing instead of ball bearings. It is a light and efficient design. I like it. But if the bushing gets dry and a bit worn, it can make the most terrifyingly loud screech whenever you coast. Ask my friend Robert. As long as you are pedaling, it’s fine because there is no relative motion between the freehub and the hub.

Disassembly, cleaning, and a squirt of oil will fix the problem short term, but plan on replacing the freehub soon.

Back to Art’s Cyclery for a video on Mavic freehub service.

If it sounds like you’re being followed by wind chimes, your cassette may be loose. Perhaps your mechanic forgot to torque it down after replacing it. Maybe it worked loose. It could be installed with the wrong shims behind it. (Eleven speed hubs accommodate 11, 10, 9, and 8 speed cassettes, but you have to get the shim thickness right.)

Count your cogs. I’ve seen a few cases of cogs breaking and flying off the bike, leaving the remaining cogs loose. If this happened to you, you must have said “What was that noise?!?!?” just before your shifting went all to hell.

Or the freehub shell could be split where the cassette retainer screws into it. I’ve only seen this once, but it is a high torque thread cut into a thin cross-section. I am surprised this doesn’t happen more often.

I lump all these noises together because they are all static clamped connections, subject to creaking over time. The acoustic properties of carbon fiber bikes make it hard to tell where a creak is coming from. These noises are usually in time with pedaling, and worse under hard pedaling. (Many times the real culprit is your quick release skewers. See What’s That @#$% Noise, Part One)

Non-round aero seatposts are notorious for squeaks and creaks. The novel clamping mechanisms they use are never as secure as a good circular clamp.

A 5nm torque key and a tube of carbon assembly paste are your allies against these static interface noises.

Note: Do not use carbon assembly paste on the steerer tube. It can abrade the carbon fiber on this critical element, according to Trek.

Saddle Bag and Contents, Other Accessories

Surely your noise problem is not something as simple as a loose CO2 cylinder in your seat pack banging against your seatpost, the spring inside your pump, or a handful of hex keys jingling around. Strip all the extraneous stuff off your bike and go for a ride to diagnose this.

One of the more bizarre mystery noises I heard about was Barry’s jersey zipper pull. He was looking all over the bike, while the random jingling sound was literally right in front of him. Whenever he looked down to try and find it, his chin would stop it. Doh!

I include Eamonn’s clicking ticking Aksium hub for completeness, even though we never did resolve it, other than to find that when we switched to another wheel it went away.

I could go on, but I want to wrap this up and move on to something else. I think I’ll do tire changing tips next time. I’ll share my four secrets to easy and successful tire changes, on the road or in the shop.