I wear sun-screen when I ride my bike – the kind that makes your skin white. It contains zinc oxide and titanium dioxide in a nice greasy lotion base. It’s made for kids and it stays on for hours, even in Texas heat and humidity. My arms and my bald head are still white when I get home from a four hour ride. If you are interested, I use Banana Boat Kids SPF 50.

The product claims it lasts 80 minutes. I’m not sure what that means. Why not 90 minutes? Does it become water-soluble or evaporate in 80 minutes?  If my skin is still white 2 hours later, is it still effective? I don’t know, but I’m willing to trust that since oxides of zinc and titanium are very inert minerals, a white film on my skin means protection.

From what I have learned, this type of “physical” sunblock works by reflection of ultraviolet light. I wonder if it glows under a black light. Hang on. I’ll be right back….

…Yep, I get a strong ultraviolet glow under my UV flashlight. Doesn’t everyone own a UV flashlight? How else do you hunt scorpions?

The other kind of sunscreen, that doesn’t make you look like a ghost, apparently contains organic compounds like oxybenzone that absorb ultraviolet, and re-emit it at lower frequencies. They photo-degrade as they perform their function, so the idea of a time limit makes sense for them. (What did we do before Wikipedia?)

What’s this got to do with roasted chicken? I’m getting there. A few weeks back I was wondering if physical sunblock keeps your skin physically cooler. If it works by reflecting sunlight, maybe less solar energy gets “under your skin”. Is it like wearing white clothing? I experimented with sunblock on one arm and not the other, but I couldn’t tell definitively if there was any difference. And there was no way I could do a double blind test on myself.

I needed to use some objective flesh, the temperature of which I could measure. I really didn’t want to stick a meat thermometer in my arm. So I got a few chicken thighs (skin on) and applied my Banana Boat to one, nothing to the other. I placed them in the sun… and it promptly clouded up and began raining. This went on for five days. Every time I pulled my chicken thighs out of the refrigerator, it clouded up. Finally today I got my test meat outside – with a fresh coat of Banana Boat – for thirty minutes of hot Texas mid-day sun. 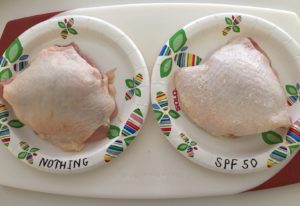 I withdrew to the laboratory with my sun-roasted samples and took multiple subcutaneous temperature readings. It turned out to be very difficult to get consistent repeatable readings. The bare-skinned thigh temperature read from 77.1F to 79.4F. The sunscreen-protected thigh temperature read 75.6F to 76.4F. My averaged results showed a temperature reduction of 2.2 degrees Fahrenheit with the application of sunscreen. Significant? I’m not sure given the range of error on my readings. Two degrees doesn’t sound like much. It is what it is. Scientific integrity requires I report my results, even if they won’t win me a Nobel Prize. 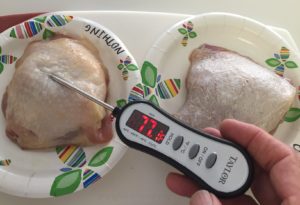 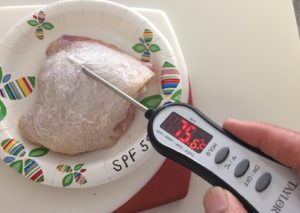 If I was interested enough, I’d now do tests on the other kind of sunscreen – the kind that works by absorbing UV radiation and re-emitting it at a lower frequency. My initial guess is that it would make your skin hotter, but I have no idea if it would be significant. Yes, I checked some under my UV flashlight. I was really disappointed that it didn’t glow fluorescent green or something, like a Jimi Hendrix blacklight poster. Does anyone know at what “lower frequency” oxybenzone emits the UV radiation it has absorbed?

My friend Pierre pointed out that raw chicken thighs are very pale (almost white) anyway, and that could be why I didn’t see much temperature difference. Maybe someday I’ll spray-tan some chicken thighs with a bronzing product and repeat my tests, but not today. I’d have to go get more chicken. I’ve already eaten the rest.

The final question that is certainly on your mind is “Sure, the radiative heating load may be reduced, but what about perspiration?” If sunscreen blocks perspiration, it could reduce your evaporative cooling and actually make you hotter. I don’t know the answer to that one, and chickens don’t sweat.  I could argue that very little sweat evaporation occurs anyway here in Texas when it’s 90 degrees and the relative humidity is over 75%. I can only observe that when I did my arm tests, both my arms were sweating profusely. Sunblock did not seem to obstruct perspiration at all.

What should I take away from all this? I wear sunscreen. I will continue to wear sunscreen for protection against long-term skin damage. And I will feel cooler, at least psychologically. Now I’m going to ponder something else, say, aluminum spoke corrosion.