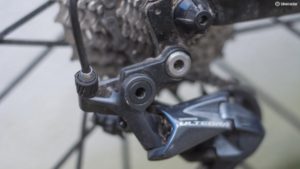 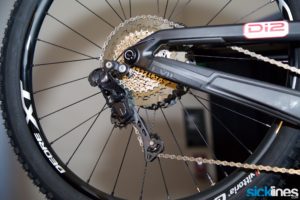 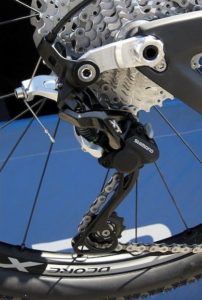 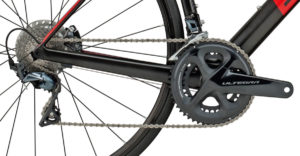 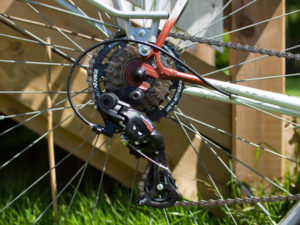 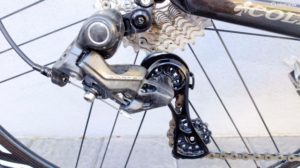 First, a special shout-out to all thirty-seven of you who have subscribed to Esoteric Observations on Bicycling and Cycling! Thanks for your interest!

Last month I logged my initial comments on SRAM’s eTAP electronic shift system.  At that time with over 1000 miles of riding I had yet to recharge the derailleur batteries. Not long after that my front derailleur battery threw me a solid red light, indicating “9-22 hours” of charge left. This happened in the garage, so it was no big deal. I recharged both batteries and slapped them back on. The day before that I had what in hindsight I believe are indications of weakening battery status.

First, I noticed that the system was not reliably transmitting gear change data to my Lezyne SuperGPS unit. At the time I just thought “That’s weird.”

Then, immediately after the guy next to me asked if I still liked my eTAP, I shifted to the big chain ring and dropped the chain on the outside. How embarrassing! I now attribute that, rightly or wrongly, to an almost discharged battery.

I‘ve ridden over 1500 miles with eTAP and that is the only shift failure I have experienced, and with a fresh charge the system is reliably transmitting to my GPS unit. I am still a fan.

I have grown to appreciate the “click equals shift” performance of eTAP. Shifting a mechanical system requires a certain degree of finesse. Push the lever too far and it shifts two gears. Don’t push the lever far enough and it clicks but doesn’t change gears. The skill becomes second nature after a while. But it is nice to simply press and release. (I’m still for some reason occasionally reaching for the left lever instead of the right to shift to a smaller rear cog.)

I have one more really esoteric observation. When I am walking my bike with my hand on the saddle the front wheel tends to wander a lot more than I recall before eTAP. I assume the absence of shift cables allows the headset to pivot more freely. It’s hard to be cool walking your bike when the front wheel is flopping back and forth.

In the next episode of Esoteric Observations on Bicycles and Cycling I’ll discuss Shimano’s “Direct Mount” derailleur standard. Check back later this month.