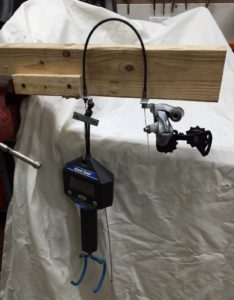 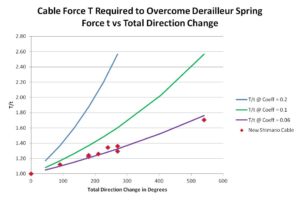 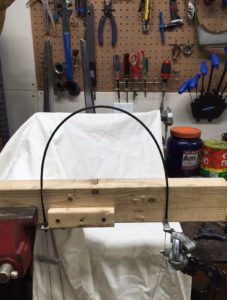 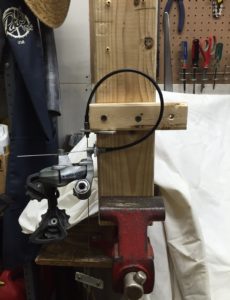 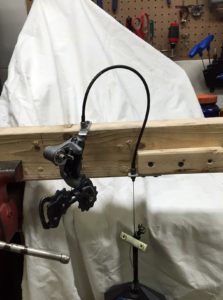 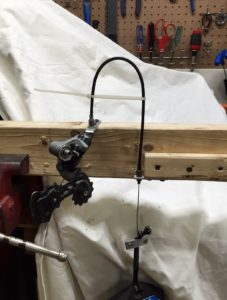 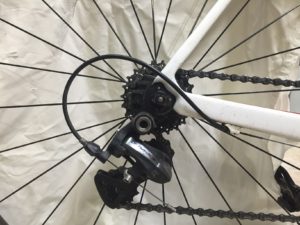 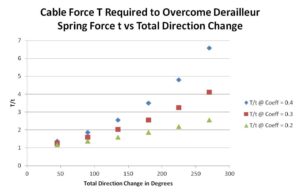 I’ve been in the garage taking measurements with my second generation “Killa’s Garage Vertical Wheel Deflection Measurement Device” and I now know how stiff a bicycle wheel is vertically. Let me tell you, it’s plenty stiff. A 165lb load on my test wheel deflected the rim vertically about 6 to 8 thousandths of an inch. That’s less than the thickness of two sheets of paper! That’s 165 lbs on one wheel, not two.

You can take my word for it and go ride your bike, confident in the knowledge that your wheels are plenty stiff, or read on. 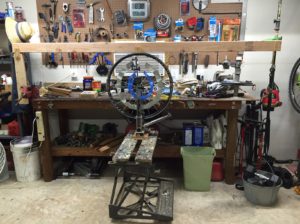 The spoke of interest in this rig is the one pointing up, because I am applying the load down on the rim, up on the axle. This is opposite the load situation on the road, but it is physically the same. Well, maybe it is wrong by about the weight of the rim and spokes – it’s close enough.

With dumbbells in a bucket, I was able to apply known loads to the wheel. My bucket of dumbbells was twice the distance from the hinge as the wheel, so my applied load at the wheel was twice the weight in the bucket (The 9 lb 2×4 applied just a 9 lb load, being centered over the wheel.)

I never thought that 42 years after taking Dr. Carver’s Statics class at LSU I’d be using what I learned to measure bicycle wheel deflection.

I used a guitar tuning app (Guitar Tuner) to measure the resonant frequency of the upward facing vertical spoke at various loads from zero to 165 lbs. I then used physics and math to convert from a change in frequency to a change in tension, and from that to a change in spoke length. If you are interested:

Some of you are thinking, why not just measure the deflection directly? Where’s the fun in that? OK, I’ll go take some direct deflection measurements and I’ll be right back…

…I’m back. That wasn’t as difficult as I thought it would be. Dial indicators are fun. I should have bought one years ago! Direct deflection measurements are included in my results below. 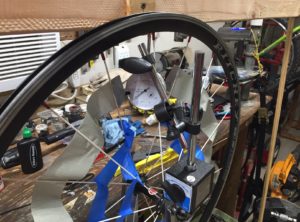 Dial indicator set to read the change in distance between the rim and the hub.

The match between calculated and measured deflection depends greatly on the value assumed for initial spoke tension. And that value is harder to determine than you’d think. I selected 150 lbs based on multiple measurements with my TM-1 tension meter and various frequency-based calculations. I could have selected a number anywhere from 135 to 180 lbs, depending on selection of assumptions.

Interestingly, if I’d have chosen 180 lbs for my initial spoke tension, the results would have overlaid almost perfectly. I was tempted to do that, but I couldn’t measure consistent tension values that high. I think this is a case of correlation with no relation.

Also, I wouldn’t try to apply a curve fit, or extrapolate beyond my measurements. My data is not that good and there’s not that much of it. But it is good enough to say that bicycle wheels deflect vertically only thousandths of an inch, and nothing compared to the flex of even the stiffest tire.